By A Special Correspondent

Rugby at St. Peter’s has been feared for during the last decade or more for the reasons that the school’s rugby team can produce winners and also create surprises on the field.

They did just that last Friday (September 16) when they beat giant killers and runners-up at the League and President’s Trophy Knockout tournaments St. Joseph’s in their traditional rugby encounter played for the Rev Fr Basil Wiratunga Shield at Havelock Park.

The win for St. Peter’s might look nothing much to celebrate for outsiders who know little about rugby this season at the Bambalapitiya school. This team had just one victory this season (Against Dharmaraja in the league) before the match against Joes. The losses they suffered at the hands of many of their opponents left them ‘bleeding’ throughout the several months of training; where the boys were made to sweat and workout in a professional coaching environment. But still, there was hope to keep their heads held straight throughout the season without succumbing to the pressures building around them. Many believe that this was possible due to the strong Christian background in which education and sports are pursued at this academic institute. Praying before a game and during the day has enabled the boys to keep the grey matter inside the boys’ brains in functioning mode; especially at a time when outsiders gave up hope on these rugby players.

When the league tournament was nearing an end an opportunity arose for the Peterites to book a slot among the quarter-finalists for the President’s Trophy knockout tournament because two top teams pulled out of the running. But then came the second blow to the team. This came in the form of running into trouble for fielding in the side a player not eligible to represent the school at sports. There is speculation that the Peterite rugby team now runs the risk of being demoted to a lower segment of the tournament text season regarding the issue of fielding in the side this player who has stirred some controversy. However, the Peterite authorities have denied all allegations levelled against this player.

The Peterite side was not a weak one and gave a run to most of their opponents during the league season and even produce a draw against Wesley and went down fighting to S.Thomas’ College; the latter fixture being a traditional friendly. The side however showed that they had to work on line-outs and even passing skills among the players were not up to the level of First XV rugby.

But there was a transformation in the side at the match against the Joes. The Peterites as a whole showed no mercy to their opponents when tackling and displayed the guts of a burglar when confronted by obstacles. There were some casualties as a result, but the message was clear; the boys were in the mood to do or die.

It was their last chance to prove their existence in school rugby this season. They were sure standing on thin ice. A loss against the Joes meant the circumstances would have swallowed them up. Coach Sanath Martis it seemed had worked on defence. The Joes’ big man, that brute of a hulk and the regular match winner Navin Marasinghe found it hard to run at will. For him, it was like running on a field laced with glue. But still, the first half produced a battering for the Peteries. The Josephians produced three tries which came through the efforts of Vihanga Randeepa, Vishika Fernando and Sachinthana Vidayanatha. The Peterites responded with a penalty in the first half and when the two sides went into halftime, surprisingly the mood in the Peterite camp was not damp at all.

Great martial artist and philosopher Bruce Lee once said that calmness is a great weapon; especially during adversity. And Coach Martis had it and showed it. What he told at the little chit chat he had with the boys at ‘lemons’ we don’t know, but it certainly worked. Martis knows the value of making it in life after a struggle. He exudes the message that ‘nothing is easy before it’s hard’. Leave alone the fact that it is not easy at all for players to satisfy him through even the best of performances. This performance by the boys probably brought drops of tear to his eyes, but a taskmaster and coach in the calibre of Martis might not show it. He has both a soft and a hard side to his character, but when the soft side is shown in a moment of a flash akin to lightning it’s beautiful. Only the alert ones might observe this.

The second half produced thunder. The game changed so dramatically and the Peterites came into the game showing the attitude of a street-smart kid. They scored their first try off the efforts of Pasindu Thakshila. The game was later stopped when the referee had to supervise the removal of an injured player and the entrance to the field of replacements. Martis seized the opportunity and was seen talking to the boys from the touchlines. He ‘probably’ spelt out to the boys to adopt a kick and chase tactic; probably sensing that the Joes would wilt under the pressure of the high ball. Joes were never ready for this tactic. Sudesh Jayawickrema scored first through this method after chasing a high kick that bounced into Joes ‘22’. The next to score in a similar fashion was Yumeth Sihara. Petes took the lead 22-21, but the Joes grabbed it back with a penalty by Ruchika Rodrigo.

But Vindya De Mel dropped a peach of a goal from 25 metres out to seal the game just before the final whistle and hand the Peterites victory.

The Peteries needed this win badly. Their rugby identity was at stake and the time till the next season arrives would have been like travelling inside a dark tunnel if not for winning the Rev. Fr. Basil Wiratunga Shield and taking it where the other silverware lies at the school’s trophy cupboard. They needed something to hold on to. The boys were seen posing with the shield and true enough there were photos taken from smartphones for posterity with the shield in hand. But what really gave them something to hold on to came in the form of finding self-worth which came through a collective team effort and a memorable victory. 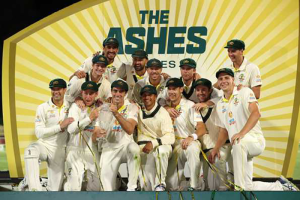