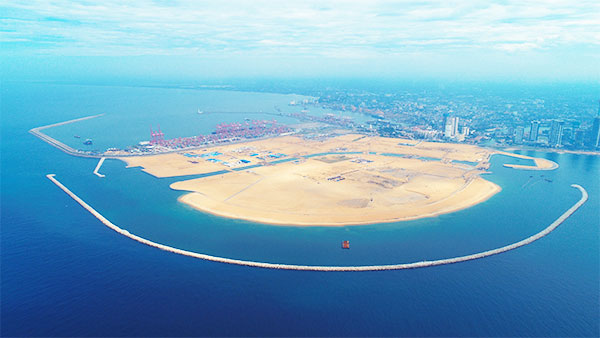 Sri Lanka’s private sector would have about five years to get ready to supply goods and services to the Colombo Port City, Sweden-based economist, Kasun Kariyawasam, said at a seminar on the Belt and Road Initiative (BRI), organized by the Asia Progress Forum on Monday.

“The Port City will also need 160,000 sets of office furniture, 75,000 bathroom sets, 28,992 water closets and wash basins, 37, 500 sets of kitchen cupboards and 37,500 sets of living room furniture. Sri Lankan companies have an ideal opportunity to make money and gain international experience. They have four to five years to be ready, but unless they get their act together, the investors, at the Port City, will import these and we would have gained nothing,” he said.

General Secretary of the Communist Party of Sri Lanka (CPSL) Dr. G. Weerasinghe said that by 2041, the Port City will have been fully occupied. There would be 75,000 permanent residents and 175,000 temporary residents.

“We can also supply food and services. This is an opportunity for Sri Lankan hotels, and other service suppliers to make money continuously. We need to expand capacity as well as efficiency. Right now, people have to wait months to buy things like tiles. This won’t work when it comes to projects like the Port City. We need to be more productive. Banks must also step in and provide finance,” he said.

Dr. Weerasinghe added that Sri Lanka also needed to ensure that adequate human resources were made available for the jobs created by the Port City.

Economist Kariyawasam said that Sri Lanka’s financial infrastructure ws weak and that the country had not established systems for cross border settlements. The Colombo Port City is a financial centre and it will do a lot to address these issues,” he said.

The Sri Lankan government must also take steps to establish payment gateways. Sri Lankans had been clamouring for that for decades but successive governments have done little, he said.

Dr. Waruna Chandrakeerthi and Prof. Samitha Hettige spoke of the importance of understanding the Chinese market to promote Sri Lankan exports there.

“The Chinese have been planting tea for thousands of years. We started tea in the 19th century, so we can’t assume that they will buy our tea. What they want is different and we must try to understand their demands. It is a big market, and we need to understand it. We need to have more sinologists,” Dr. Chandrakeerthi said.