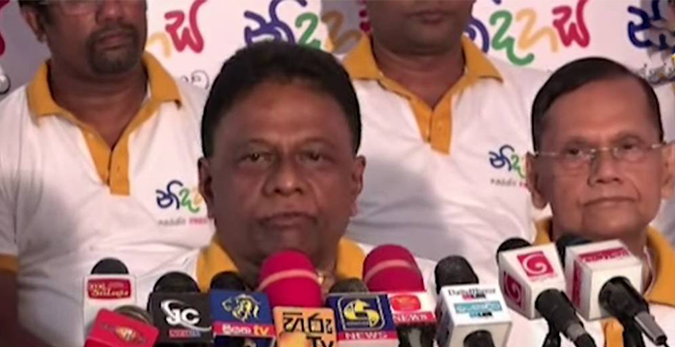 The SLPP rebel group aka ‘Nidahas Janatha Sabhawa’ has complained to the Commonwealth Parliamentary Association, the Inter-Parliamentary Union and the South Asian Association for Regional Cooperation that time is not allocated for its members to speak in Parliament.

The following is the text of the letter: “As you are aware, a deeply entrenched democratic tradition is one of the inherent strengths of our country. Sri Lanka is legitimately proud of its unbroken record in the exercise of the universal suffrage, of which our people have been beneficiaries even before our emergence as an independent nation. Voters of our country have assiduously safeguarded their right to change or re-elect governments at free and fair elections, regularly conducted in accordance with applicable laws.

An essential corollary of this right is the ability of Members of Parliament to attend meetings of the Legislature uninterruptedly and to participate freely in its proceedings, including the work of Committees which form an integral part of the legislative function. The diversity of opinion expressed in the Chamber in an atmosphere conducive to orderly interaction is, admittedly, an indispensable prerequisite for the proper performance of the legislative function.

It is in the context of these values, emphatically reaffirmed at the meeting of the Commonwealth Parliamentary Association only a week ago in Halifax, Canada, that we bring to your attention some recent developments in our country, which give rise to acute concern.

The signatories to this letter are all Members of the current Parliament, and several among us have held important positions in the Sri Lankan State, including as Ministers of Foreign Affairs, Education, Health and Media and in leadership positions in crucial Parliamentary Committees dealing, inter alia, with control of public finance.

At the Parliamentary Elections of August 2020, at which we all played an active role with great commitment and dedication, our political party known as the Sri Lanka Podujana Peramuna (SLPP) secured 143 out of the total of 225 seats in Parliament and formed a strong administration. Unfortunately, a section of the leadership of the party grotesquely distorted the people’s mandate and ended up installing as the President of the Republic the leader of a humiliatingly defeated party, against whom we had campaigned with the utmost vigour at the Elections and secured overwhelming endorsement at the hands of the electorate.

A series of events without parallel in any part of the democratic world – which represent a cynical caricature of sound Parliamentary and democratic practice – culminated in our collective decision to constitute ourselves an independent Group within the ruling Party. The reasons for our decision to cross the floor were set out succinctly in Parliament by Emeritus Professor of Law, Dr. G. L. Peiris, former Foreign Minister of Sri Lanka, on 31st August.

The predicament now faced by us all is that we are deprived of any opportunity at all to speak in the Chamber of Parliament and to take part in the deliberations of Committees, as we have done in the past. Others who have resorted to similar action recently in their relations with the Party have been accorded entirely different treatment, establishing discrimination in a stark form.

Since we are now completely silenced in Parliament by a dictatorial fiat which infringes basic democratic norms, we are left with no option but to try to articulate our point of view on vital matters of contemporary national policy in the gardens of Parliament.This is, clearly, a violation of the privileges of Members of Parliament, protected by law, as well as a denial of the public’s right to make an impact on the proceedings of Parliament through the interventions of their elected representatives.

We would add, in fairness, that the President, the Prime Minister, and the Speaker, in response to repeated representations made by us, have candidly conceded the manifest unfairness of this situation. Regrettably, however, all attempts to offer redress have failed up to now. We attribute this tragic state of affairs to insidious extra-Parliamentary influences operating in direct contravention of the letter and spirit of the country’s Constitution.

In these circumstances, we respectfully exhort you and your Organisation to use your good offices and to do everything in your power to intervene appropriately, with a view to preserving the core democratic rights of our people and of their elected Parliamentary representatives.”